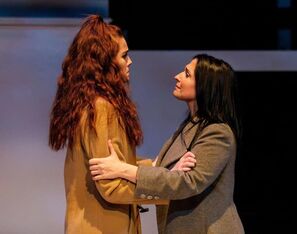 "Strong, passionate performances and tough, poignant themes propel Blackfriar's current production of the Tony and Pulitzer Prize-winning musical, NEXT TO NORMAL . . . The powerfully talented Janine Mercandetti stuns us as Diana, the wife and mother, with both her considerable singing skills, but also her deeply moving acting. J. Simmons, as her husband, is also impressive in both departments."
- Jack Garner, Democrat & Chronicle Newspaper, NY

"Mercandetti, in the catalyst role, stuns. From her controlled, powerful vocals to shattering emotional moments, it's clear she has worked to connect with the tortured inner workings of Diana, particularly during the poignant numbers "I Miss the Mountains" and "You Don't Know."
-Leah Stacy, CITY Newspaper, NY 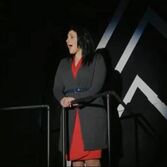 "Janine Mercandetti brings a unique approach to Diana . . . she's an accomplished singer, and could out-sing even the healthiest Alice Ripley.  Her vocal quality is clear, her notes are precise, and her phrasing excellent . . . it's an award worthy performance.

I’ll leave readers with this thought: I hate standing ovations as the accepted “standard.” They should be reserved for excellence, performances that exceed expectations. I was one of the first to leap to my feet at this production, and if you are lucky enough to see it, I’m sure you will too."
-  Nathan Miller, Buffalo Theatre Guide

"Blackfriars' production delivers with the power and grit of the original Broadway production . . . The cast delivers strong performances across the board. Janine Mercandetti's powerful voice energizes her portrayal of Diana as she experiences turbulent mood swings (I Miss The Mountains), frustration (My Psychopharmacologist And Me) and loss (How Could I Ever Forget)."
-Dan and Julie Izzo, BroadwayWorld.com

"Had the privilege of seeing some powerhouse performances last night at Blackfriars Theater's Next to Normal! It doesn't get better than this, folks. Janine Mercandetti gives the performance of her career (so far) as Diana. Her voice soars to the heights and her beautifully nuanced performance is one for the ages." ​
​- audience member

"The talented cast gave an unforgettable and poignant performance of an important and disturbing work that does a deep-dive into the morass created when a family member suffers from mental illness. 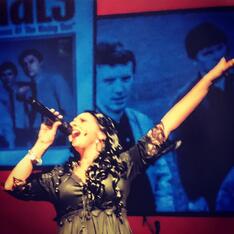 "I can't imagine that there are nine singers out there who can perform this music as powerfully as the folks featured in this production . . . a ton of fun, and an absolute masterclass of talent."
-Colin Fleming-Stumpf, BroadwayWorld.com

​ “Janine Mercandetti’s performance of The Animals’ “House of the Rising Sun” was phenomenal! Her powerful voice adding a depth of soul and grittiness that is necessary for this song to be a success.”
- Buffalo Theatre Guide
JANINE MERCANDETTI: OUT OF COSTUME 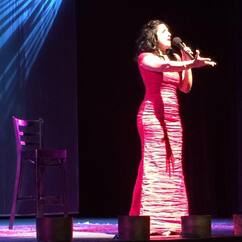 An Open Letter to Janine Mercandetti

"Out of Costume" at the JCC Centerstage is outstanding. I will forever picture you wearing only that outfit as you lounge at home, watch Netflix, work out or tend to your garden. I hope to one day look that glamorous when I am out of costume. The over-exaggerated vocal "run" in the first number made me scream laugh. I nearly lost my mind in the 80's montage. I realized how good you can make songs sound that I loathed (at the time) and that Bonnie Tyler was actually a 3 hit wonder. You inspired me to revisit the Kenny Rogers songbook. Everyone in that room crawled inside your heart and shared the tenderness and honesty that lives there. Your vocal acrobatics are astounding and I love everything about you. I laughed, I cried . . .  and marvel at the universe that is your talent."
-audience member

​​
​" . . . rewarding . . . thoroughly enjoyed the one-woman show-tune and lounge-singing performance by the talented Janine Mercandetti. The lady has a lot of charm and a ton of vocal talent."
- Jack Garner, Democrat & Chronicle Newspaper, NY 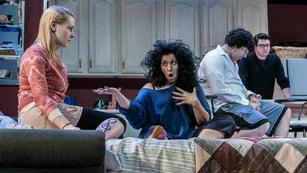 "Mercandetti almost runs away with the show as Daphna. This character is loudmouthed, ever-grudging, nagging, unendingly self-righteous, and just plain mean, and Mercandetti gives it all she's got; yet she also manages to find just a bit of sympathy and understanding for this character, giving a performance that is much more than a caricature. Daphna's spectacular mop of hair (much commented on by Liam) is practically the play's fifth character.

Mercandetti and Carl Del Buono have performed together so often lately that audiences might be forgiven for thinking they're actually one (very talented) performer. 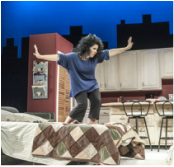 They certainly work together as one here, giving full-out, but precisely detailed performances. For example, Del Buono gets a rage-filled aria soon after his entrance, and he nails every laugh in it, but he also subtly echoes Daphna in his body language -- showing that despite their mutual disdain, Liam and Daphna are indeed related. This is impressive acting and directing."
-David Raymond, CITY Newspaper, NY 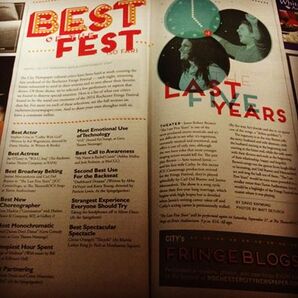 Jason Robert Brown's "The Last Five Years" is one of the most-produced recent musicals, and it's not difficult to see why: it's ingenious, extremely musical and emotional, and offers a cast of only two, although the two have roles that most younger singing actors would kill for. The pair play Brown -- here named Jamie -- and his first wife Cathy. In this recent JCC Centerstage production revived for the Fringe Festival, they're played splendidly by Carl Del Buono and Janine Mercandetti. The show is a song cycle about their five-year long marriage, which begins with high hopes but is derailed when Jamie's writing career takes off and Cathy's acting career is permanently stalled. (By the way, he's Jewish and she is, to quote one of the songs, a "shiksa goddess.")

The ingenuity is in the way Brown tells the story: husband and wife alternate, with the husband starting at the beginning and moving to the bitter end, while the wife starts with their divorce and ends at the beginning of their relationship, happy and hopeful. Brown's songs run the gamut from laugh-filled to lacerating, and Del Buono and Mercandetti act and sing the hell out of them. "The Last Five Years" would be even more powerful in a smaller venue than Xerox Auditorium, but it would be a highlight of the Fringe Festival no matter where it was playing.
-David Raymond, CITY Newspaper, NY

"Carl Del Buono and Janine Mercandetti play husband and wife in this reprised performance from a Rochester JCC production that played one year ago. Together they give an unquestionably strong vocal performance, which is saying something for a musical that is so vocally demanding. Mercandetti belts her heart out song after song with complete control, and her sensitive moments in “I’m Still Hurting” and “See I’m Smiling” are crushing. Her “Audition Sequence,” in which Cathy alternates between the lyrics of an audition song and her inner anxieties as she panics: “Why are you looking at my resume? Stop looking at my resume- I made up half my resume!” is also hilarious."
-Marisa Caruso, New York Theatre Guide, NY
NUNSENSE | Sister Robert Anne 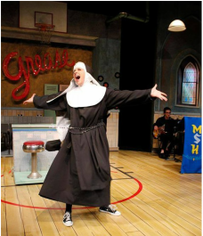 ​"A frequent powerhouse at Blackfriars, Janine Mercandetti plays Sister Robert Anne, a spunky nun from Brooklyn who desperately wants to be a star. Mercandetti’s strong voice and dancing carries the group from start to finish, and it’s hard to imagine the cast without her."
- Caurie Putnam, Democrat & Chronicle Newspaper, NY
BOEING BOEING | Gabriella 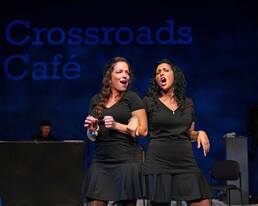 "The success of this show depends on finding two equally strong performers to pull off the demanding vocals, and Mercandetti and Fazio are dynamite. They truly share this show . . . and turn it into a true singing tour de force. If you like your Broadway belted, your voices huge, and harmonies that literally make your spine tingle, you cannot miss this show." 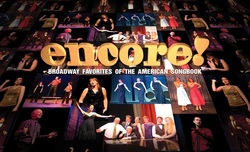 ​". . . Compliments must be paid to individual performers for their work as vocalists and actors.  A huge shout-out goes to Janine Mercandetti, who nailed “Bali Ha’i” from South Pacific and “Defying Gravity” from Wicked. The woman has a solid, strong voice and confident stage presence."
- Debbie Waltzer, Democrat & Chronicle Newspaper, NY
[title of show] | Susan 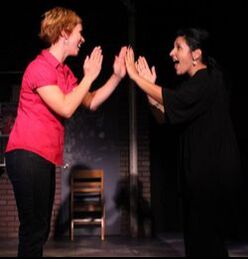 ​"The show needs, and has at Blackfriars, a strong cast. Dan Howell (Jeff), Matt Liptak (Hunter), Janine Mercandetti (Susan), Elizabeth West (Heidi) and Andy Pratt (Larry) were phenomenal and beyond deserving of the standing ovation the full house gave them. . . Mercandetti and West played secondary characters, but were so entertaining you couldn’t wait for them to get back onstage. The always powerful Mercandetti brought the house down several times, most notably with her prowess in “Die, Vampire, Die!,” a ballad about the fears that haunt artists ."
- Caurie Putnam, Democrat & Chronicle Newspaper, NY
PARADE | Lucille Frank 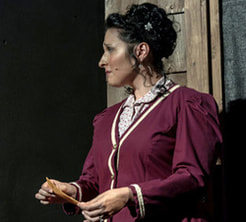 The written and audience reviews for Parade have been absolutely incredible!  Thank you so much! Something very special happened to me for the first time in my career during the run of this show and that is the only review I am choosing to share here for this show.

After one of my performances, I walked into the lobby like I always do to greet my family and  friends. Much to my surprise, I was greeted with a rousing second round of applause by the 150 - 200 people left in the lobby.  It was one of the most thrilling experiences of my career.  I will cherish it for always.  The written review of one person's opinion is always a fun thing to share.  But this, to me, is the review that really counts.  Reaching the entire audience is what truly matters to me as an artist.  Thank you.  I will never forget this exceptional honor.
- Janine Mercandetti
THE WHO'S TOMMY | Mrs. Walker ​
DEBBIE DOES DALLAS: THE MUSICAL | Lisa 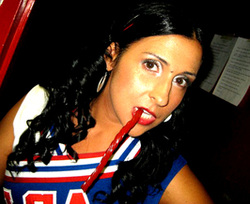 ​"Janine Mercandetti really impresses as Lisa, the cheerleading Salieri to Debbie's Mozart, cackling maniacally as she sets about stealing Debbie's man and possibly even her dreams. She rips into her big, bluesy number "God Must Love a Fool," and lacks even a hint of self-consciousness in her performance."
- Eric Rezsnyak, CITY Newspaper, NY
A NEW BRAIN | Rhoda 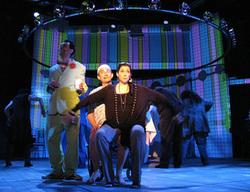 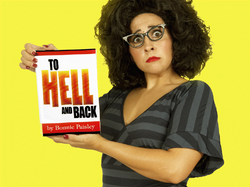 ​"In the burlesque strip tease “Mrs. Santa Claus Blues,” Bonnie (Janine Mercandetti) provides the perfect showstopper as she breaks from the show’s FCC-palatable material for a closer look at Christmas “on the pole."
- Matthew Murray, talkinbroadway.com, NYC
JACQUES BREL IS ALIVE AND WELL & LIVING IN PARIS | Woman 1 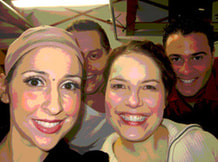 "My favorite of all his songs, the heartbreakingly beautiful cri de coeur, "Marieke"... Ricci and especially Mercandetti portray the characters and emotions each song created. Mercandetti sang with great conviction, especially in "Marieke" and "Brussels."
- Michael Lasser, City Newspaper, NY
SHIPWRECKED! AN ENTERTAINMENT The Amazing Adventures of Louis de Rougemont (As Told by Himself) | Woman 1 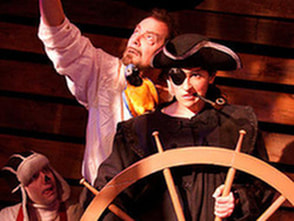 "In the roles of Player #1 and Player #2, Janine Mercandetti and Jason Mincer get to literally put on a variety of hats, playing everything from a sea captain...to a dog. Both of them are at their best in the scenes where De Rougemont is grilled by a phalanx of supposed scientific experts, although they have many wonderful moments throughout the show...Toward its end the play takes a somewhat unexpected turn, and what started out as a cheerful distraction takes on a very real heaviness. It's not that the tonal shift doesn't work - it does, thanks mostly to the excellent acting and directing that leads us to the point..."
​- Eric Rezsnyak, City Newspaper, NY